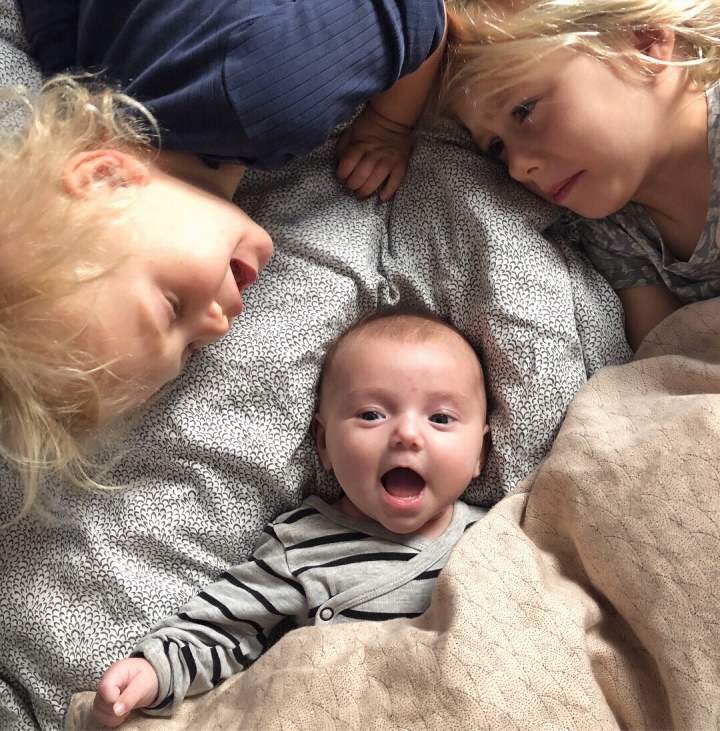 Tomorrow we can celebrate our ‘two months as a family of five’-anniversary. It’s been two pretty amazing months, if you ask me. But lately reality definitely has hit. Today I was defeated! Actually, this morning knocked me out. Bringing three kids to gymnastics was more than I could handle. Well, the gymnastics itself wasn’t too bad, really. No, it was more the whole giving everyone breakfast, getting out of the house, into the car, out of the car – and then again after gymnastics into the car, out of the car, giving everyone lunch etc. that caught me off guard.

Yeah, so far I have learned that the art of mastering the life with three kids basically has something to do with logistics, organisation and preparation. Sadly those are not my main skills. I’m more of a living in the moment kinda person. Or, I’m just not very organised. I forget stuff. I underestimate the time I have available. I’m impulsive. And I do everything in the very last minute. That’s more the kinda person I am. Not a very good match with having three kids five and under, I tell ya.

And today I was pretty close at throwing in the towel. But then it all turned around in a matter of minutes and once again I felt pretty lucky to be able to hang out with all of my three kids every Friday – because that is a privilege. It really is.

And hey – you can’t have it all. So, I might stress when I need to get out of the house in five minutes and everyone is still in their pyjamas’, bags still need to be packed, the baby needs a new nappy, I still need to take off yesterdays make-up and pop some new stuff on to look a little bit less of a zombie – and the worst part – I still need to get everyone in the car and into their carseats and drive through the morning traffic while at least one kid is complaining about something I have absolutley no chance of doing anything about anyway. Or they could just be telling me about the fact that worms have no eyes and that they eat dead people(!) Yeah, a little bit of stress might occour. But it could be worse.

At least my children are relatively good at following the important rules we have set for them. Rules like; don’t run away, for instance.

That’s not a given, guys. Today, when everything was finally starting to settle around here, two boys on Abby & Billie’s age randomly turned up in our garden. There was no sign of either of their parents – and one of them was naked. They are not complete strangers as they have walked past our house and had a little play in our garden once, but they are none of our close friends. They live on the main road a couple of blocks from ours so they would have had to walk a fair bit to get here. I assumed their mum was just around the corner with their babybrother in the pram and since I was in the middle of putting Lulu to sleep inside I didn’t really give them much much attention – but had the doors open so I could hear them play outside.

When Lulu finally fell asleep I went out there. The boys’ mum had arrived and she wasn’t too happy with her oldest offspring.

Apparently they had climbed out a window, while their mum was having a shower and their babybrother was asleep, and run off into the street and ended up in our garden. Hey – as their mum said; “Good thing they came here to play today, the other day they just ran down the street and I had to call the police to catch them“…so yeah, it might get a bit stressfull here at times, but I think we and our kids are doing quite okay, afterall.

Well, the bottom line is; Lulu is two months tomorrow, we are slowly learning to manage the three kids lifestyle – ohh, and to keep ourselves busy I have gone back to uni to study communication at the University of Queensland. More about that later…

For now it’s time to have a well deserved Friday beer. One more week down!

My name is Majeline Dalsgaard. I am from Denmark, but now live in Australia with my Aussie man, Joshua.
I am the proud mum of Abby Rose from ’13, Billie Maja from ’15 and Lulu Quinn from ’18.
This is a blog about my life and our family in all it’s glory.

Thank’s for dropping by.

There was an error retrieving images from Instagram. An attempt will be remade in a few minutes.